After the test of the new 2 litre engine at Melbourne in November, we were finally ready to give the forest stages ago. The first event we were both able to enter was the North Humberside motor club forest stage’s rally. As the event is now based in Whitby it was an ideal event for us.

As is the norm the car was able to walk through scrutineering with no problems. Such has been the success of the “goody” bags we are now handing out, approximately 500, a 100% increase on our original plan. We took two girls to the scrutineering to begin handing out the bags Milly and Hayley were the girls tasked to promote the team and our sponsors. CRG Nichol very kindly loaned Andy a 4X4 to carry all the bags and the girls (Thank you).

At documentation all became apparent we were poorly seeded, number 61 out of 83, which didn’t include the 34 1400’s running before. Poo.

The Service area had been moved from Whitby Quayside to the Abbey Car Park on the cliff top, no tent today then. We were due to start at 10.50am. 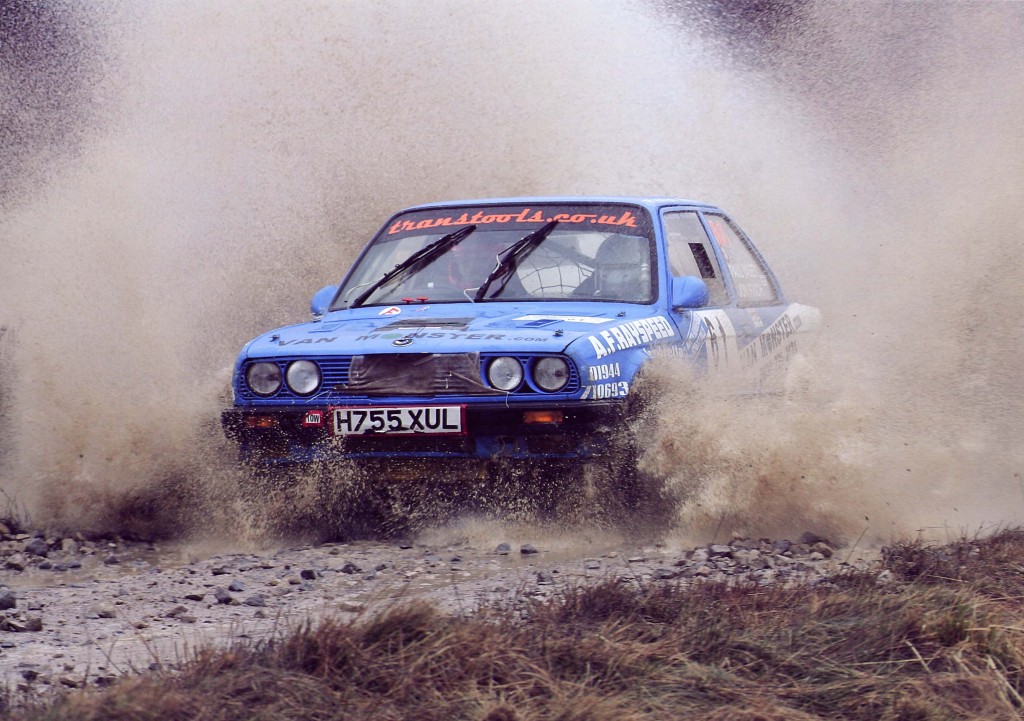 The VF-Racing BMW at the North Humberside Forest Rally

The morning started off dry, Andy, Nick, Stefan and Chris were on hand as our service crew, with Dave and Iain as our chase car.

SS1. This stage stared at Maybeck and finished in Langdale, and has been one of our favourites, we set off well, but it wasn’t long before the first of our problems became apparent, we expected the stage to be rough as we were well down the entry list, what we hadn’t expected was the amount of cars off. Eight on the first stage, all of which had to be avoided. Some time was lost but, a good start.

SS2. Confidence in the car was building, another good stage, 4 cars off.

SS3. After what seemed like a life time on the road section, we were back into Cropton. Jon drove well and the times started to improve, only 5 cars off on this stage, were we in a rally or the somme?

Service, we’d some how managed to loose the front grill, apart from a tyre change there was little for the lads to do. Hayley had been to both the start and the service area to ensure every goody bag was handed out, she even managed to collect £86 for the GNAA service.

SS4 As we left the service area it stared to rain and as a rule we do well in difficult conditions, and today was no different. Stage 5 was a repeat of stage one, meaning we were able to push harder 5 cars off on this stage.

SS5, The weather was getting worse but we weren’t bothered everything was on track.

SS6, we finished stage 6 with a big smile on our faces, Jon had driven well, the car had proved it’s self. I hadn’t called anything wrong.

We finished 61st out of 116 starters and eighth in class.

It turned out the front runners hadn’t hit any rain till the last stage, their loss.

Thanks to Hayley and Milly for the distribution of the 500 bags, big thanks to Richard for the loan of the Vehicle.