Meet the members of the VF Racing Team

Jon Finch is our main race driver. He is 35 years old and has been rallying for the past 17 years. He started in a Talbot Sunbeam, moved on to a Vauxhall Nova 1300cc and now drives our BMW 318is. He is a saturation deep sea diver for a living.

Paul Vasey is the co driver. The founder of VF-Racing. Paul works for a local company as a maintenance fitter and has been racing for over 22 years. 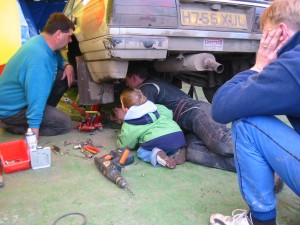 BMW Melbourne Paul and son at work on the car

Nick Finch is 37 and comes from Thornton Dale. He is an Archaeologist Consultant and is a keen fisherman. He shares the sames passion for motorcars as his brother Jon and drives a Subaru Imprezza (speaks for itself)..

Lee Allerdice is 32 and has been a mechanic for over 16 years. He was until recently a keen footballer but a broken leg soon put a stop to that. He is now a keen mountain biker. Another member of the team who hales from Thornton Dale .

Andy Holmes is a Production Engineer. He is 35 and comes from Malton. Andy also enjoys the drive and enters his Talbot Sunbeam at the single venue events. When he is not driving, he likes to fly.

Paul Grayson is 26 years old and has been a mechanic for 10 years. He is a keen footballer and plays for Thornton Dale. He is a keen Man Utd supporter and when not watching or playing football, he enjoys mountain biking. He was introduced to VF Racing through Lee who he works with. His ambition is to be a mechanic for a WRC team.

Jacky Vasey is the wife of Paul (14 long years poor girl) and is a qualified learning disabilities nurse and an NVQ care assesor.